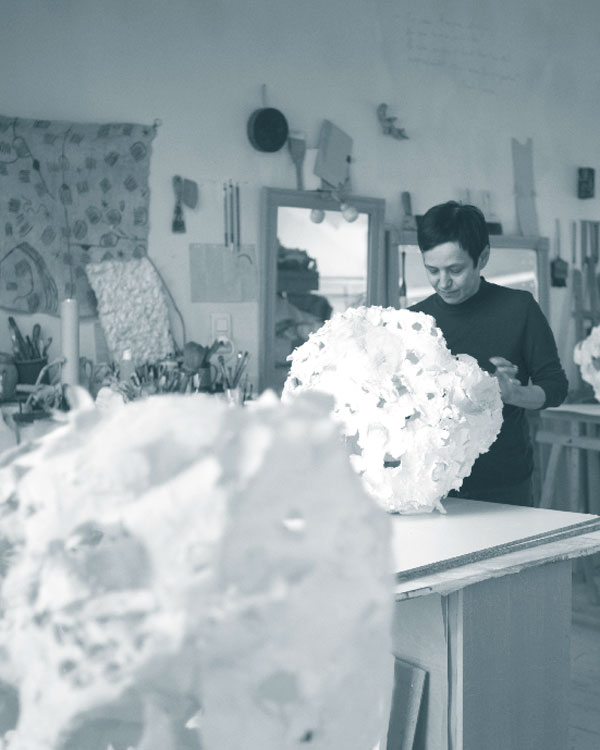 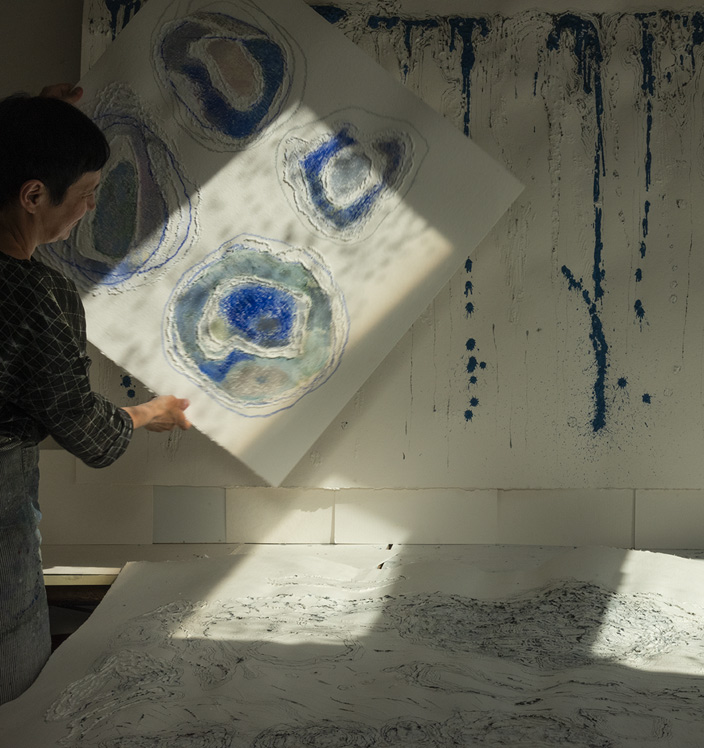 Raw materials are a fundamental part of Catherine Bernis’ practice and directly impact the forms her work takes. By incorporating substances sourced from nature, the artist seeks to physically describe the world; not to represent it but simply to observe it.
His approach is a constant search for everything that can constitute a landscape, landscapes which reflect what there is in common between the interior of the soul and the universe.
With a very technical training, in Paris, in the restoration of old paintings, she is a kind of artist and craftsman, who defends the profession of painter and the workshop. It is there that with the help of instruments and tools made by herself, she pushes to the extreme the traditional supports of painting and drawing, going so far as to transform them into bas-reliefs, and in sculptures.

Through various exhibitions in France and abroad, CB has developed a language in which her perception of nature, her interest in science and her travels within herself have given birth to works of which each gesture is imbued with spirituality.

Chaos, an exhibition at Galerie Artset Limoges in 2011, was Catherine’s final venture into figurative art, portraying a tangle of human figures, movements, emotions and volumes. She then turned her hand to semi-abstract painting with an emphasis on raw materials and gestures, as demonstrated in her 2015 show at the Institut Français in Bratislava, Slovakia, with works evoking the topography of a seabed; a delicate landscape created by texture alone.

Over time she refined her language. Raw materials became the essence of her work and her forms became more defined, with a particular emphasis on white, as seen in her 2016 exhibition at Paris’ Galerie Pixi.
In 2018 at the Espace de l’Art Concret in Mouans-Sartoux, Catherine exhibited her Monades series, paper-based sculptural work where volume and its consequences – such as shadow and negative space – create terrains that are detached from any sense of scale, asserting the freedom of an art that dispenses with narrative and symbolism and existson its own terms. These new textures have allowed the artist to begin depicting a primitive world; a world of plant, mineral and organic life.

In the spring of 2020, in the solitude of her studio, Catherine Bernis, draws up her own escape plan, an escape within herself. It is during this time that interior landscapes arise, seeming to describe the rhythm of impenetrable natural phenomena in the making or in the process of extinction. The paper fibers are covered with mysterious geometries. The simple, raw, textile-like crust of the fibers is exposed to water, incision, engraving, plowing, color pigments and drying which fertilize the paper material.
Work she shows in Paris in February 2021 at the Papiers d’Art gallery
In his (m)ondes series, 2022, lines and fibers are at the heart of the plastic research of the artist, who manages to give rhythm to drawing, matter and thought. The harmony that emanates from it gives birth to new works halfway between drawing and sculpture. Lines and reliefs are drawn like a large page of writing.

In parallel with her work, Catherine also makes regular entries in a notebook, which serves as an invaluable testing-ground in the course of her artistic journey .

Have written about his art: Amélie Aranguren (curator), Matthieu Gounelle (Professor at the National Museum of Natural History) and Jeanette Zwingenberger (Art historian).
Is represented in Paris by the PAPIERS D’ART-Yuri Levy gallery and the PIXI Marie Victoire Poliakoff